The Abbey of San Valentino is a splendid mansion (it was the first 5-star touristic facility in Umbria) located on a hill in front of the beautiful town of Todi, with marvellous panoramic view. This antique medieval abbey dates back to the thirteenth century and covers an area of about 1.200sqm. During the years, it has kept its historicity and structure: in fact, it boasts several “ups and downs” and passages typical of antique mansions. The property is currently used as touristic facility: divided onto two levels, we find 10 bedrooms, 11 bathrooms, 7 living rooms and 4 kitchens. The antique church is now used as relaxing area with a modern art exposition. The abbey is surrounded by 21.870sqm of a very well-maintained land with gardens, hedges, an olive grove that produces great extra virgin olive oil and a swimming pool to restore. The Abbey of San Valentino used to be an antique Benedictine abbey church. It was abandoned by the Benedictines probably during the fourteenth century, but it kept its title as abbey headed by an abbot. The church was reported in the books for the payment of the Tithe since 1275, when it was managed by a prior and four canons. In 1332, during the process of the Pope against the “Todini”, for conquering Orvieto, the Prior of the church of San Valentino, De Arcis, was one of the accused priests. In 1404, prior of the church was Don Antonio Grilli from Naples. In 1467, prior was Don Giovanni Andreucci, along with the canons Biagio Agostini, Giacomo Meneci and Cecco Carletti. Since the end of 1500, all the priors belonged to the Clementini family from Amelia (Ascanio Clementini, then Don Properzio Clementini in 1568 and Curzion Clementini in 1619).

The abbey is located on the top of a hill, in a high position overlooking the town of Todi. 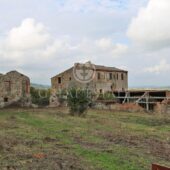