The prestigious and historic "Il Castelluccio" is a neo Gothic property built in the second half of the 1800’s covering 610sqm in size over 3 levels plus the top floor in the smaller tower. Although the property is on different levels it is very harmonious and well proportioned as a whole, both in its general appearance as well as in its interior and outdoor areas. The main facade, similar to the original, has three entrance doors with various embellishments: all the windows are topped with terracotta elements that echo the mullioned appearance of the windows on the two towers (the larger tower is located at the front of the entrance while the smaller tower is at the side overlooking the countryside) that, while always in brick, have a cornice and several coats of arms of noble families linked to the Marchesa Vittoria Spinola, former owner of "Castelluccio" and daughter of the first King of Italy; Vittorio Emanuele II of Savoy. The main entrance, with its pointed arch, has two rows of cornicing depicting modelled floral images and Corinthian capital columns. The door handles have the name Pilade Mazza engraved on them; he was the subsequent owner of the property after the above mentioned Spinola. Through the front door, surmounted by a large mullioned window, you enter the grand entrance hall where there is a splendid repainted ivory enamel tiled staircase leading to the second floor. To the right there is the living room, renamed the "Zodiac Room" due to the paintings that the current owners commissioned from Maestro Mario Marco Marroni, a noted local artist who was also responsible for all the other pictorial and evocative frescoes in the other rooms where, for example, sitting you can admire a view of Città della Pieve produced by the trompe l'oeil technique. French for 'deceive the eye' this delightful technique is used to create the illusion of a 3D image. From the main entrance to the left, passing through some small rooms, there is the main dining room whose walls and ceiling have been restored and have beautiful decorations that contribute to the "richness" of the residence. The four corners of the dining room have fonts, similar to that for holy water, which were probably originally for decanting wine. All the windows and doors are original with some windows having stained glass. The upper floors have 8 various sized ensuite bedrooms which have been fashioned from the lodgings of the original building. They feature vaulted ceilings which have also been painted by the skilful hand of Maestro Marroni. The main tower has been converted into a single suite over 2 floors where it is possible, via a spiral staircase, to access the panoramic terrace outside. Outside 'Il Castelluccio' there is a large park of about 6,000sqm which is accessed through a majestic cast iron entrance gate which features an elaborate three rowed Gothic design of esoteric symbols of good and evil. The park boasts lime trees, horse chestnuts, rare indigenous pines, Lebanon cedars and other flowers and plants, a legacy from the previous owner. Not far from the front of the property there is a large oak tree which is about 500 years old. At one time, the park housed several iron gazebos that were used for various purposes. Some, located along the driveway, housed various species of exotic animals while others, like the one that can still be seen in front of the facade on the right, is used for serving breakfast during the summer. Of rare beauty there is also a large circular domed greenhouse. Measuring 15 metres in diameter this is the true "heart of the park" and was once a former aviary for exotic birds and baboons. At the back of the main residence there is a single level rectangular building 100sqm in size. This was once the property’s old ‘lemon house’ and today, following its restoration, is used as a small spa with a comfortable and convenient space/accessories as well as a bathroom. Superficie utile:(620|netsurface) Vani:(32|rooms) Bagni:(14|bathrooms) Camere:(8|bedrooms)

Città della Pieve is a municipality within the province of Perugia, and is situated on a hill about 500 metres above sea level, overlooking the surrounding areas of Lake Trasimeno and the Val di Chiana. This Umbrian town is the birthplace of the famous Renaissance painter Pietro Vannucci, better known as "Il Perugino" whose medieval style is evidenced in many of the oldest buildings that still retain the typical brick structure. A place of art and culture, this historic centre is now in great demand for its extraordinary landscapes and healthy fresh climate. Città della Pieve is strategically located on the Tuscan Umbrian border in an area that offers several important spas, such as the prestigious "Fonteverde" of San Casciano dei Bagni, Chianciano Terme, Bagni San Filippo and Bagno Vignoni. This is in addition to its proximity to the area’s main historic and cultural attractions such as Montepulciano, Pienza, Orvieto and Perugia as well as the magnificent natural attractions of Lake Trasimeno. The prestigious property, "Il Castelluccio" is positioned in a countryside location just outside Città della Pieve’s historic centre and has a lovely panoramic view of the town and the Umbrian countryside. A short stretch of country road allows easy all year round access to the property. A1 Motorway: 15km away. Train station: 8km away. Airports: Perugia-Sant'Egidio (53km) and Rome Fiumicino (190km). 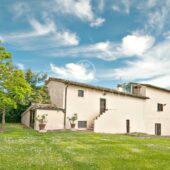